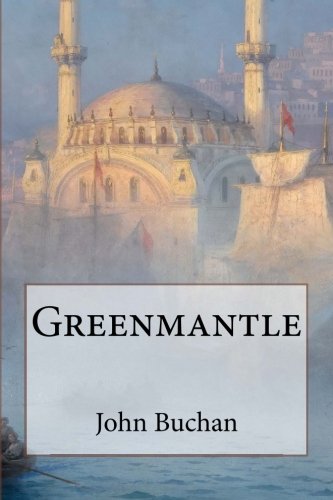 Greenmantle is the second of five novels by John Buchan featuring the character of Richard Hannay, first published in 1916 by Hodder & Stoughton, London. It is one of two Hannay novels set during the First World War, the other being Mr Standfast (1919); Hannay's first and best-known adventure, The Thirty-Nine Steps (1915), is set in the period immediately preceding the war. [Literary significance and criticism] The book was very popular when published, and was read and enjoyed by Robert Baden-Powell and by the Russian imperial family as they awaited the outcome of the Revolution in 1917. Just as the British and American characters are positive, slightly jingoistic clichés, many of the German characters are negative clichés; for example, Colonel von Stumm is an ox-necked, bull-like bully with secret effeminate (possibly homosexual) tastes. Buchan saw his novel-writing as part of the war effort. Stumm, the bully, is intended as a symbol of Britain's war enemy of the time, Imperial Germany. However, when Buchan writes of a meeting between Hannay and the Kaiser, he portrays the German leader very positively, as a sensitive man who is greatly troubled by the war. This is one of the most unusual and unexpected episodes in the novel. He makes similarly sympathetic characters of a poor forester's wife who shelters Hannay when he has malaria, and of the captain of the Danube river steamer who takes Hannay on as engineer. Herr Gaudian, a renowned German engineer whom Hannay meets briefly during his time with von Stumm, and who later returns in The Three Hostages, is respected by Hannay, who describes him as "a capital good fellow". Critics have claimed that the weakest elements in this book are the clunky narrative crutches Buchan uses, particularly the many unlikely coincidences and sit-down narratives with which subsidiary characters are brought in at predictable moments and made to tell their adventures. The first chapter of Greenmantle, "A Mission is Proposed", was chosen by Graham Greene for his 1957 anthology The Spy's Bedside Book.

The 2034th greatest fiction book of all time