South of the Border, West of the Sun: A Novel by Haruki Murakami 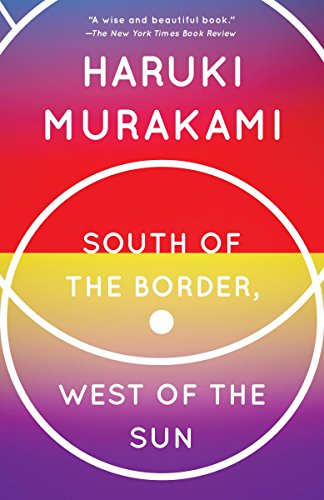 Following the massive complexity of The Wind-Up Bird Chronicle--Haruki Murakami's best-selling, award-winning novel--comes this deceptively simple love story, a contemporary rendering of the romance in which a boy finds and then loses a girl, only to meet her again years later. Hajime--"Beginning" in Japanese--was an atypical only child growing up in a conventional middle-class suburb. Shimamoto, herself an only child, was cool and self-possessed, precocious in the extreme. After school these childhood sweethearts would listen to records, hold hands, and talk about their future. Then, despite themselves, in the way peculiar to adolescents, they grew apart, seemingly for good. Now, facing middle age, finally content after years of aimlessness, Hajime is a successful nightclub owner, a husband and father, when he suddenly is reunited with Shimamoto, propelled into the mysteries of her life, and confronted by dark secrets she is loath to reveal. And so, reckless with enchantment and lust, Hajime prepares to risk everything in order to consummate his first love, and to experience a life he's dreamed of but never had a chance to realize. Bittersweet, passionate, and ultimately redemptive, South of the Border, West of the Sun is an intricate examination of desire, illuminating the persistent power of childhood and memory in matters of the heart. From the Hardcover edition.

The 2359th greatest fiction book of all time