The Interior Castle by Teresa of Avila 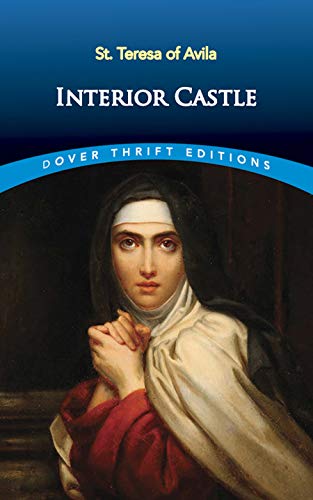 The Interior Castle, or The Mansions, (Spanish: El Castillo Interior or Las Moradas) was written by Teresa of Ávila, the Spanish Carmelite nun and famed mystic, in 1577, as a guide for spiritual development through service and prayer. The work was inspired by her vision of the soul as a diamond in the shape of a castle containing seven mansions, which she interpreted as the journey of faith through seven stages, ending with union with God.After being ordered to write her autobiography, published posthumously as La Vida de la Santa Madre Teresa de Jesús (The Life of the Holy Mother Teresa of Jesus), Teresa was hesitant to begin writing again on her views of the perfection found in internal prayer. She started writing her seminal work, Interior Castle, on June 2, 1577, Trinity Sunday, and completed it on the eve of St. Andrew's Day, November 29, 1577; however, there was a five months-long interruption in between, effectively leaving a fortnight each for first and second halves of the book. In August 1586, it was decided to print Teresa's works, which had been collected and preserved by her secretary, Ana of Jesus. The Augustinian friar and poet Luis de León, was selected as the editor, and finally in 1588 the book was published at Salamanca.The books The Interior Castle and The Way of Perfection, taken collectively, are practical blueprints for "seekers" who want to really experience prayer as mystical union with God. Further, Teresa's exposure of how she was blessed with contemplation illuminates the Catholic theologies of grace, the sacraments, humility and ultimately love.

The 931st greatest fiction book of all time