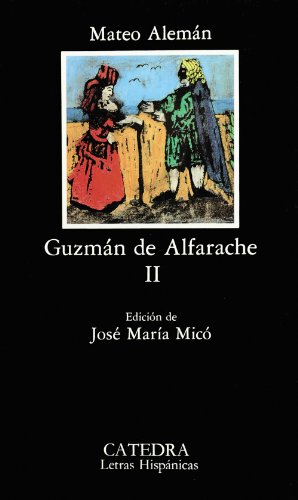 Guzmán de Alfarache [ɡuðˈman de alfaˈɾatʃe] is a picaresque novel written by Mateo Alemán and published in two parts: the first in Madrid in 1599 with the title Primera parte de Guzmán de Alfarache, and the second in 1604, titled Segunda parte de la vida de Guzmán de Alfarache, atalaya de la vida humana.The works tells the first person adventures of a picaro, a young street urchin, as he matures into adulthood. It thus ultimately both recounts adventures and moralizes on those childish excesses. Guzmán de Alfarache, by this means, is conceived as an extensive doctrinal sermon about the sins of society, and was so received by the author's contemporaries, despite the hybrid qualities between an engaging novel and a moralizing discourse. The novel was highly popular in its time. Many editions were published, not only in Spanish, but in French, German, English, Italian, and Latin. The English translation, by James Mabbe, was published in 1622, under alternative titles The Rogue and The Life of Guzman de Alfarache. Apocryphal sequels and imitations were also soon produced, being that of 1602, written, probably, by the lawyer and poet Juan Martí, under the pseudonym of Mateo Luján de Sayavedra, and published in Valencia, the most important and successful, due to its influence on the second part of Alemán.

The 1002nd greatest fiction book of all time